THE RETURN OF THE DUKE is out in 6 days!

Introducing our hero, Severin Knight, the Duke of Knighton…

Her heart-shaped face was dominated by large, doe-brown eyes, her thick lashes fanning rapidly as she stared back at him. Her skin was sun-kissed, her cheeks tinted a charming rose. She had delicate features…except for her lips which were lush and plump, the color of crushed berries. Just above the left side of her mouth was a tiny beauty mark, nature’s way of punctuating temptation.

Beneath her serviceable brown frock, her bosom was full and high, her waist narrow enough for him to span with his hands. The fullness of her patched skirts hid her lower shape, but he would wager his factories that she was nicely rounded, with hips that would cradle a man as he plowed her. He became aware of a tightening in his own lower regions, the faint hum of lust in his veins.

Devil take it, he thought with a frown. What is the matter with me?

He did not make a habit of ogling women. He found it particularly distasteful when men took advantage of servants like this young female, who had a right to go about her duties without harassment. The fact that he’d entertained debauched thoughts about her was unacceptable and, frankly, baffling. He prided himself on self-discipline, his ability to keep his baser emotions and urges in check. This quality had allowed him to transform himself from a guttersnipe to a gentleman in the truest sense of the word.

Yet this female stirred his most primal depths. He’d never seen a mouth as carnal as hers…as kissable. He chalked up his reaction to the fact that it had been years since he’d experienced the sweetness of lips against his own.

Grab your copy of THE REUTRN OF THE DUKE today! 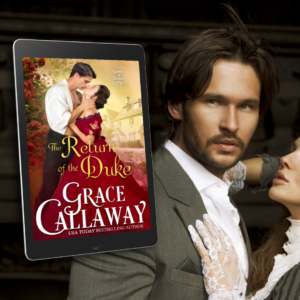 There are currently no comments.

This site uses Akismet to reduce spam. Learn how your comment data is processed.

Receive updates on her book releases, giveaways, and more!